The Nippon Kobudō Jikishin-Kai took its name from an ancient Zen saying:  "Jikishin kore dōjō nari," which translates as "a pure heart transforms into a dōjō."  Guiding its members to achieve this transformation was the sole purpose of the Jikishin-Kai and the teachings of both Miura Sōshihan and Shimabukuro Hanshi.  Their desire was that every student of classical Japanese budō come to fully understand this proverb and live it out in the world.  They believed that each of our lives is like a pebble dropped in a pond.  It sends ripples into our surroundings.  One transformed life affects countless others and is capable of making meaningful change purely by its example to others.

Few of us enter the dōjō on our first day with pure hearts.  We go there to learn martial arts, and our motives in seeking to do so are often anything but pure.  So the first step of this transformation ... (full article here)

Posted by Michaela Pellman on 14 August 2010 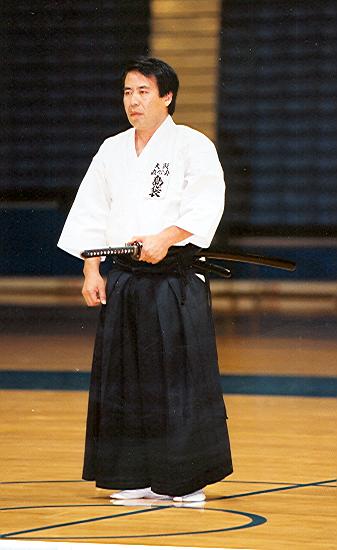 From humble beginnings, Shimabukuro Masayuki Hanshi rose to become one of the most accomplished and influential martial artists of the early 21st century.

Born in 1948 in Ōsaka, Japan, Shimabukuro Masayuki Hanshi began his martial arts training in his early teens with jūdō, karate-dō, and Ryūkyū kobudō.  By the age of 30 he held dan (black belt) rankings in several styles of martial arts.   But it was in 1975 that he began the training in Nippon kobudō that would have the most profound impact on his life and his future in martial arts.  It was in the same year that the Nippon Kobudō Jikishin-Kai was founded that Shimabukuro Hanshi became a direct student of the Jikishin-Kai's founder, Miura Takeyuki Sōshihan.

In April 1989, Leonard J. Pellman Sensei founded the Skyline Karate Club in Lemon Grove, California.  The Skyline Karate Club was among the handful of dōjō that affiliated with the Nippon Kobudō Jikishin-Kai from the very start.  In 1992, when the Nippon Kobudo Jikishin-Kai USA was founded, the Skyline Karate Club opened its first dōjō in a strip mall in Rancho San Diego, California.  Since it was no longer operating out of the Skyline Wesleyan Church recreation centre, it had to be renamed.  Pellman Sensei initially renamed it the Yōgi-Kan (養義館), but Shimabukuro explained that it was a name better suited to a dōjō for Yakuza than for budōka, and suggested the name Seishin-Kan (正心館) instead, since 正心 is almost identical in meaning to 直心.  By the end of 1992, the name had been officially changed to Nippon Budō Seishin-Kan, and is customarily abridged to simply the Seishin-Kan in conversation.

In 1992 and 1993 the  Seishin-Kan dōjō in Rancho San Diego was designated as the "San Diego Hombu" for the Nippon Kobudō Jikishin-Kai USA, which was operated from Shimabukuro Hanshi's home in Escondido, California.  In late 1994, the Seishin-Kan sold its Rancho San Diego dojo to another JKI member and moved to Aurora, Colorado.  By this time, the JKI had opened its own dojo in San Diego, and ... (read more here)

If you have memories, anecdotes, or photographs of Shimabukuro Hanshi that you would like posted on this JKI legacy page, please contact us at info@seishin-kan.org.