Lee was born 19 April 1938 in Anyang, an agricultural village a few miles south of Seoul, Korea, where he grew up on his parents' small farm.  The post-war period was a time of great deprivation in Korea, so he often had to fight off other children trying to steal his textbooks, food, clothing, and other possessions while walking to and from school.  In 1951, he began formal training in Tang Soo Do under Hong Jong Soo, who was the most senior student of the founder of Tang Soo Do, Hwang Kee Kwanjangnim.  He advanced quickly, achieving 3rd gup rank the following year.  Shortly after his promotion he was attacked by a dozen members of a Korean street gang and defeated them all single-handedly.  He earned his chodan (1st degree Black Belt) in 1953 and yidan (2nd degree) in 1955.  At school, Lee also trained in yudo, the Japanese sport of judō also practiced in Korea during the Occupation.

In 1956 Lee graduated high school and immediately joined the Korean (ROK) Marine Corps.  The training was brutal and intended to produce equally brutal soldiers.  The final endurance test involved cutting two holes 100 yards apart in the ice covering the Han River in January.  "Each recruit jumped into the first hole in full battle gear," he explained, "The ones who found a way to climb out the second hole became Marines.  The ones who didn't became popsickles and weren't found until the spring thaw."  The men who survived this training were as fierce with their allies as with their enemies, and there were often savage fights in the barracks.  "When we entered a town," he added, "All the people hid inside their houses, because we were above the law.  We could commandeer any vehicle or property for our use and treat the villagers however we wanted." In 1959, while still in the ROK Marines, he earned his samdan (third degree).  In 1960 he was sent to the Marine Corps Recruit Depot in San Diego, California, to train American Marines in Tang Soo Do and attend USMC radio and electronics classes, returning to Korea in 1961, where he completed his military service obligation.  Several of his karate students from MCRD helped him obtain a visa to return the United States in 1962 as one of the original seven Tang Soo Do masters sent by Hwang Kee to promulgate Tang Soo Do in America and was assigned reponsibility for the entire Pacific Coast.  In 1964 he was promoted to sadan (4th degree).  The following year he opened a dojang at the corner of 32nd Street and University Avenue and enrolled at City College, majoring in Economics.  Among his students in the late 1960s were several of his original trainees from MCRD, as well as Chuck Norris, who had begun his training in Tang Soo Do while stationed at Osan Air Force Base in Korea.

In 1968 he earned a promotion to odan (5th degree) and transfered to San Diego State College to continue his education.  In 1970 he moved his dojang to the corner of 35th Street and El Cajon Boulevard, and in 1971 he began teaching karate at San Diego State College.  When Pellman Sensei enrolled in the karate programme at San Diego State in 1971, the students were also encouraged to train at the 35th and El Cajon dojang.  Master Lee and his wife and son lived in a small apartment above the dojang, along with his brother, Yoon, who assisted by making belts and sewing patches onto uniforms for the students.  The early 1970s were the competitive heyday for Master Lee's dojang.  His students, dominated the karate tournaments in Southern California during that time and all his students were strongly encouraged to test their mettle in competition, despite the fact that Chuck Norris broke away around 1970 when Master Lee refused to promote him to yidan (2nd degree) due to neglect of his training and his arrogant attitude.

However, unbeknownst to most of Master Lee's students, political issues in Korea were beginning to affect the fate of Tang Soo Do.  In June 1969, under pressure from high ranking military officers practicing Taekwondo, the Korean government had forced Hwang Kee to stop using the term Tang Soo Do and instead call his art Soo Bahk Do.  Shortly thereafter, a rift occured within the art's governing body, the Moo Duk Kwan, led by Hwang Kee's former seniormost student and Master Lee's first instructor, Hong Jong Soo, creating two divisions:  Moo Duk Kwan Soo Bahk Do, and Moo Duk Kwan Taekwondo.  Whether or not this actually divided Master Lee's loyalties, internal politics did begin to undermine his relationship with Hwang Kee.  Nevertheless, in 1972 Master Lee was promoted to yukdan (6th degree), and earned his bachelor's degree from San Diego State that same year. 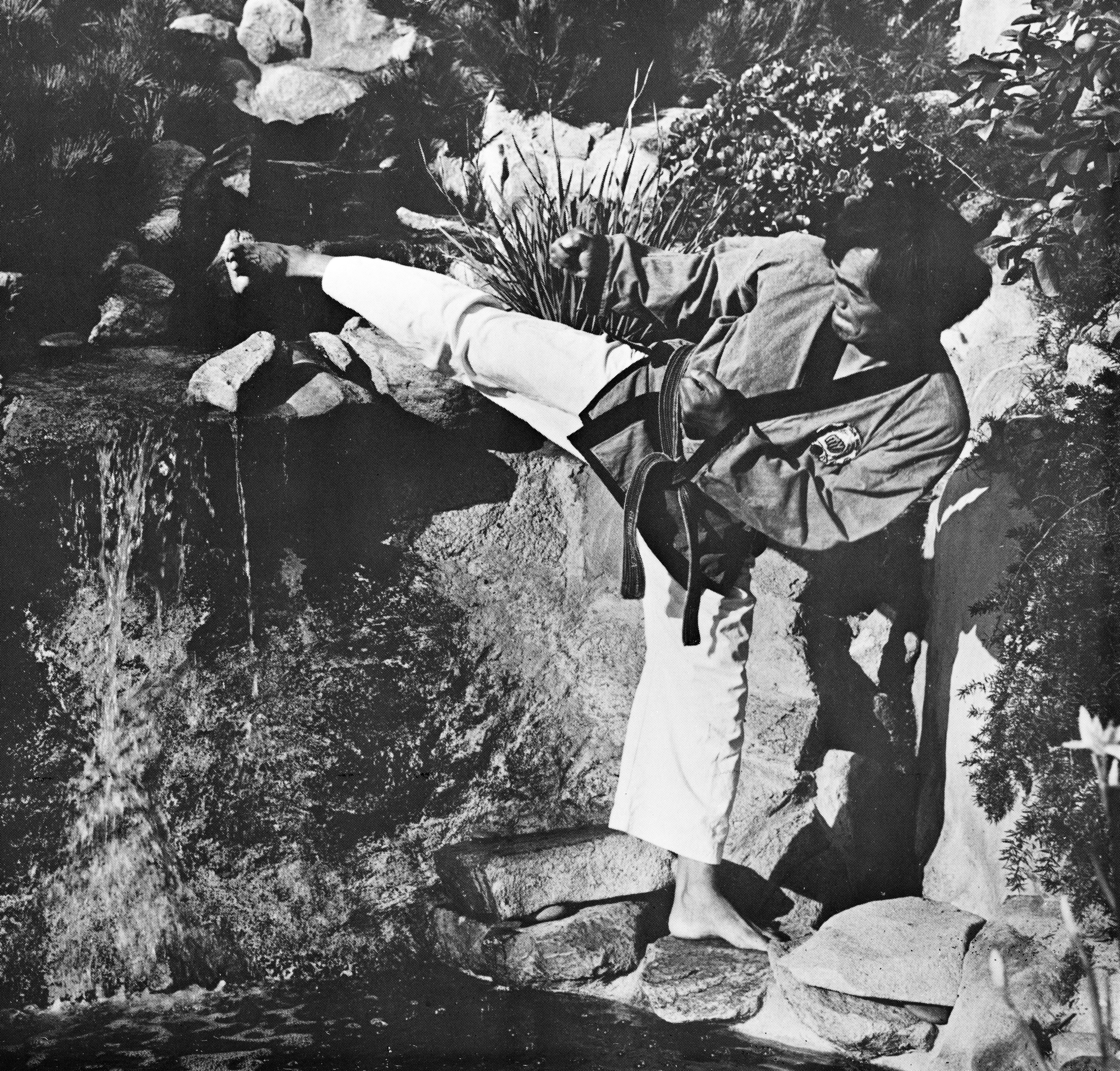 In 1974, Master Lee moved his dojang into a suite in a newly constructed strip mall on Convoy Street in Kearny Mesa because it had outgrown the facility at 35th & El Cajon Boulevard.  The dojang on El Cajon Boulevard was housed in an old wooden building from the Depression Era.  It was dimly lit, cramped, dingy, and smelled of sweat.  The new building was a large, clean, brightly lit facility that seemed to mirror Master Lee's increasing embrace of a more modern approach to martial arts training.  Promotion in rank now included requirements for intellectual development; not just improved karate skills.   Students were expected to submit academic papers, introspective essays, recite poetry, perform skits, and exhibit other cultural and aesthetic arts.

In 1975, Master Lee flew to Seoul, where he tested for and was promoted to childan (7th degree).  He also visited his first instructor, Hong Jong Soo, who had been elected vice president of the Kukki Won (Taekwondo governing body) the previous year.  He never revealed his reasons, but shortly after his return, there was a significant change at his dojang.  He began calling his art Tangsoology—the science of Tang hands—and adopted the blue jacket seen in the photo at left for his yudanja (black belts).  In addition to retaining the traditional hyung (practice patterns) of Tang Soo Do borrowed from Shōtōkan, he implemented several new hyung of his own creation that strongly emphasised a variety of kicking techniques.  He had broken away from the Moo Duk Kwan and its founder, Hwang Kee, and was now independent.

Many factors may have influenced his decision to sever his relationship with the Moo Duk Kwan.  Tang Soo Do itself was undergoing internal changes.  Hwang Kee's son, Hwang Jin Mun, who renamed himself Hwang Hyun Chul after nearly being killed in an automobile accident and was junior in age and rank to Master Lee, moved to the USA in 1975 and was appointed to oversee all Moo Duk Kwan instrutors there.  Other instructors once junior to Master Lee had been promoted over him, apparently in reward for political favours.  In Korea, politics had resulted in Tang Soo Do being recast as Soo Bahk Do and its origins as a Japanese karate style mythologised.  Lee's own instructor had broken from Tang Soo Do a decade earlier, and was now playing a major role in the suppression of Tang Soo Do in Korea.  And several of Lee's contemporaries had broken away and formed their own Tang Soo Do organisations.  It may have been a combination of these factors, or it may simply have been that his instructional philosophy and direction had diverged sufficiently from the founder's that it was no longer beneficial to either to continue their affiliation.

In some respects, Master Lee's independence and the establishment of Tangsoology reflected his own evolution as a naturalised American citizen.  He had long advertised his school as a "dong-hak" ("Eastern teachings") dojang, but as his citizenship and his education in American academic institutions progressed, he increasingly adopted more Western ways of thinking and teaching.  Just as he had personally blended American culture with his Korean upbringing and culture, so too Tangsoology was a blend of Eastern and Western culture, as well as the traditional and the modern.

The Legacy of Master Lee

Master Lee's influence on his students was profound and lasting.  Many of his yudanja (black belts) went on to establish their own dojang.  These included Chuck Norris and Fred Kenyon, both of whom operated chains of dojang in the 1970s, as well as Lloyd Francis, Danny Nolan, Michael Conniry, Tim Britt, and Leonard Pellman.  Many more continued training in the martial arts their entire lives; not just as a passing fancy in their youth.

He instilled in his students the values he personally exhibited:  strength of character, mental and physical toughness and resilience, compassion, and a passion for self-improvement.  All of his students were inspired by his example to emulate these qualities, striving to better themselves intellectually, spiritually, and physically in every aspect of their lives.

Master Lee continued teaching until the final months of his life, when he was diagnosed with late-stage cancer of the liver.  In September 1985, he established an ad hoc committee of his senior students to manage to the day-to-day operations of his dojang.  By October, he needed a wheelchair for mobility and had to be carried into the Tangsoology annual banquet.  He passed away in his hospital bed on 28 November 1985 with his wife, Soyan, at his side.  He was interred on 02 December 1985 at El Camino Memorial Park in San Diego, California.  He was aged 47 at the time of his death.

Master Lee's name has been written many ways in English.  We have chosen to write it as Lee Jong Hyun.  At left is the way it is written in the Korean hangul syllabulary.   The Korean language contains several vowels and consonents that have no exact English equivalency.

For example,  이 is most often written as Rhee or Lee in English, but is most closely pronounced as Yee, the third most popular English spelling.  종 (Jong) is correctly pronounced with a long "O", so it doesn't rhyme with Hong Kong.  And 현 should rhyme with "young".