Ono-Ha Ittō-Ryū (小野派一刀流) kenjutsu one of the most famous and highly respected schools of samurai swordsmanship.  It was founded by the legendary Itō Ittōsai Kagehisa (1550—1644), one of Japan's most revered swordsmen, around 1575.  Born Itō Yagorō, Ittōsai began his budō journey at the age of 14, when he left home and floated across the Sagami Bay on a piece of driftwood from his home town of Ito on the coast to the island of Ōshima more than five miles away.  There he single-handedly drove off a small group of bandits who had been terrorising the local people.  In gratitude, the villagers paid for young Yagorō to travel to Kamakura to study kenjutsu under Kanemaki Jisai (1536-1615) of Chūjō-Ryū, who was also instructor to Sasaki Kojirō.  After training for several years with Kanemaki Shihan, Itō embarked on a musha shugyō, a journey of training in which he engaged in 33 duels without a loss.  In two of those duels, his sword seemed to act of its own accord and cut down his opponents in a single stroke the moment they attacked.  As a result of those experiences he took the name Itō Ittōsai ("One Sword Purity") Kagehisa, and formulated his own style of swordsmanship from the concept of defeating a foe with a single, decisive cut that was simultaneously attack and defence.

Ittosai's two most senior students were Ono Zenki and  Mikogami Tenzen (1560-1628).  To determine which of them would succeed him as leader of Itto-Ryu, Ittosai had them fight a duel to the death.  Mikogami won the duel, but he was so grieved at taking his friend's life that he assumed the surname Ono in his honour and changed his given names so that he was known thereafter as Ono Jirōemon Tadaaki.  After being named along with Yagyū Munenori as one of two official kenjutsu instructors to the Sei-i Tai-Shōgun, Tokugawa Ieyasu, Ono Tadaaki formed his own branch of Ittō-Ryū, which he called Ono-Ha Ittō-Ryū.

The hallmark of Ittō-Ryū is its unique method of kiriotoshi, the powerful downward cutting stroke that serves as simultaneous defence and counter-attack and makes a skilled Ittō-Ryū kenshi (sword master) unbeatable in combat. 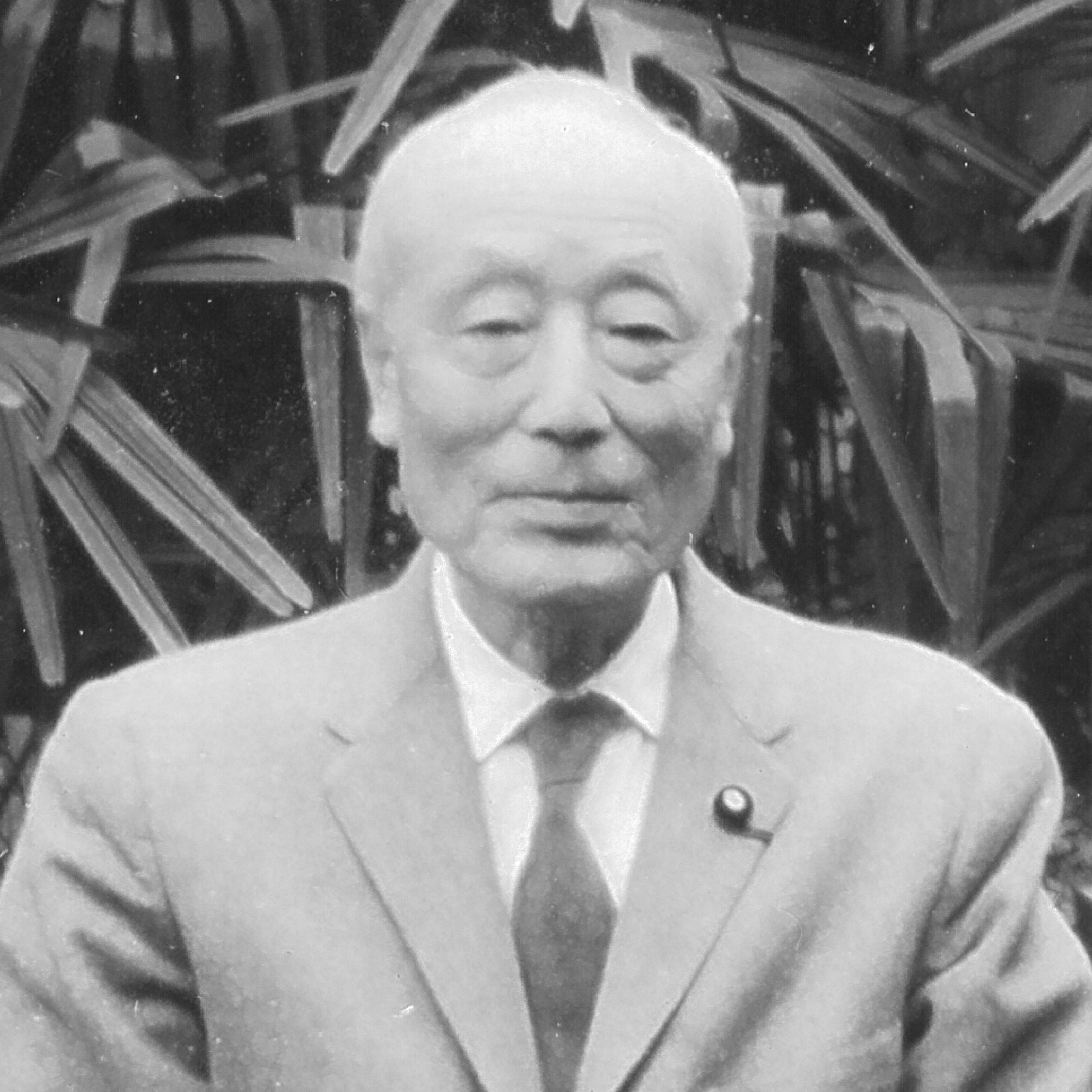 Although Ono Tadaaki was never pitted against the likes of a Miyamoto Musashi in combat, only a proven exemplary kenshi (swordmaster) would be personally selected to instruct the family and trusted retainers of the Sei-i Tai-Shōgun. Not only was Ono Tadaaki such a man, but several of his direct descendants continued to instruct the elite members of the Tokugawa shogunate.  Of course, being one of the only two systems taught to the Shōgun's closest confidants meant that its techniques remained highly secretive.  In addition, Yagyu Munenori, the other instructor to the shogunate, was politically astute and a personal advisor to the Shōgun, which meant that Yagyū Jikishinkage-Ryū had a larger following than Ittō-Ryū among the Tokugawa retainers, despite the fact that Ono Tadaaki was considered the superior kenshi.

Ono Tadaaki passed Ittō-Ryū on to his sons, Ono Jirōemon Tadatsune and Ono Jirōemon Tadao, who became the second and third sōke (family leaders) of the style.  The fourth sōke was Ono Tadao's son, Ono Jirōemon Tadakazu, who taught the style to the daimyō of the Hirosaki Han, Tsugaru Nobumasa (1646-1710), whose domain was located in modern day Aomori-ken in northern Japan.   Three generations later, the seventh sōke, Ono Tadayoshi, taught the Ittō-Ryū system to high ranking retainer of the Tsugaru Han, Yamaga Hachirozaemon Takami.   These choices to teach the system to "outsiders" would prove to be its salvation!

The Ono family died out a couple generations later, but both the Yamaga and Tsugaru families survived into the 20th century and thereby kept the art of  Ittō-Ryū alive.   In the mid-1890s, Sasamori Junzō (1886-1976) began training in Ono-Ha Itto-Ryu under Tsushima Kenpachi, an instructor from the Tsugaru lineage.  He later spent many years training with Tsushima's successor, Nakahata Hidegoro.  Following Nakahata's death, he became a disciple of Yamaga Motojiro Takatomo, the last sōke of the Yamaga line, and eventually succeeded him as 16th sōke of a reunified Ittō-Ryū.  Sasamori's influence extended far beyond Ittō-Ryū, however.  He played a major role in the popularisation of the sport of kendo, which was adapted primarily from Ittō-Ryū.  Sasamori was one of the few kendōka ever promoted to jūdan (10th dan), and his book, This Is Kendō, published in 1964, is still considered the seminal work on the sport.  His master work on kenjutsu, Ittō-Ryū Gokui ("Secrets of Ittō-Ryū) was published in 1965.  In addition to his many contributions to the art of kenjutsu and the sport of kendō, Sasamori held a number of important and influential political offices, including several terms in the House of Councilors, Ambassador to the Republic of Congo, and Director of the War Reparation Agency.  He was inducted into the Zen Nippon Kendō Renmei (All-Japan Kendō Federation) Hall of Fame in 2003.  But it was his son who would bring Ittō-Ryū to the attention of the rest of the world. 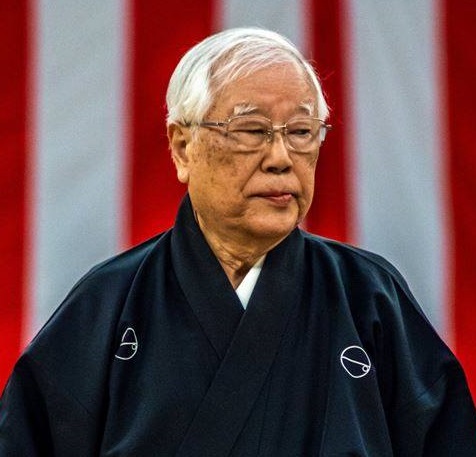 Almost immediately, he set about promoting Ittō-Ryū to a wider audience.  His efforts were aided by the fact that he had many contacts outside of Japan, owing both to his father's political efforts and his own studies at the Harvard School of Divinity.  He soon established study groups in Italy, Belgium and other European countries, as well as the United States.

In addition to his own travels, and students visiting his Tōkyō dōjō from around the world, Sasamori Sōke was aided greatly by the advent of videography.  Around 1978 the Nippon Budōkan, which had been built for the 1964 Tokyo Olympics, hosted a series of demonstrations of Nippon kobudō (ancient Japanese budō).  These demonstrations were filmed and released on some 80 VHS video tapes.  One of these featured Sasamori Sōke and some of his senior students demonstrating most of the curriculum of Ono-Ha Ittō-Ryū, allowing the art to be observed by anyone anywhere.  The video is still available, now in DVD format.  In 2004, Sasamori Sōke filmed and released an instructional video of the first ten waza of Ono-Ha Ittō-Ryū, explaining each technique in detail.  This DVD was better publicised and reached a much wider audience than the Nippon Budōkan series did.

About that same time, Miura Takeyuki recommended that Shimabukuro Masayuki visit Sasamori's dōjō in Tōkyō.  Greatly impressed by Sasamori's depth of knowledge and the efficacy of Itto-Ryu, Shimabukuro Hanshi immediately began training with Sasamori Sōke .  In 2006, Shimabukuro Hanshi added Ono-Ha Ittō-Ryū to the JKI syllabus of instruction, and began promoting it to JKI member dōjō around the world.  The Nippon Budō Seishin-Kan was among the first of those dōjō to introduce Ittō-Ryū into its curriculum.  In the ensuing years, the KNBK sponsored several visits to the USA and Europe by Sasamori Sōke and helped further expand the popularity of the style worldwide. 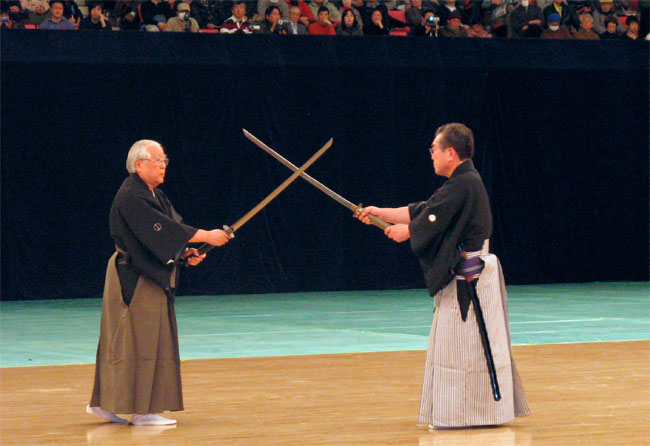 Ittō-Ryū began as a set of five guiding principles, called the Kōjō Gokui Goten (高上極意五点), meaning "Five Highest Secret Points."  These five general concepts were subsequently expanded into a curriculum of 50 specific techniques for the daitō or ōdachi, which were further supplemented over the passing centuries with techniques for the kodachi or wakizashi and a set of five battō-hō sword-drawing methods.

There are nine major postures, called kamae, in Ittō-Ryū, each having a different purpose and offering different opportunities for defence and counter-attack, depending upon the situtation and the opponent's actions.  The nine kamae are together called the Kake Kyūhin, and are practiced in nearly every Ittō-Ryū training session as a warm-up exercise.   Another frequent warm-up exercise is a series of repetitive cuts, either to head, called suri-age men, or to the wrist, called suri-age kote.  This are performed by alternating from in no kamae cutting to the right or yo no kamae and cutting to the left.

Another key aspect of training is the practice of kiriotoshi, a straight downward cut that is the essential ittō ("one sword") of Ittō-Ryū.  If performed correctly, kiriotoshi simultaneously deflects the opponent's cut and cuts the opponent in a single stroke.  Kiriotoshi is practiced at three distances, referred to as kai ("straight"), gyō ("moving"), and sō ("waving grass"), alluding to three forms of calligraphy:  kaisho (standard), gyōsho (semi-cursive), and sōsho (fully cursive).  Conceptually, kai is kiriotoshi performed under ideal conditions and distancing, gyo is at a closer distance requiring adjustment of footwork and timing, and so occurs at a closer distance still, simulating an opponent who has moved unexpectedly, requiring instantaenous adjustment to ever-changing circumstances, like grass blowing in the wind.  These generally correspond to beginner, intermediate, and advanced skill levels.

Once participants are thoroughly warmed up and have practiced their fundaments, training in the waza of Ittō-Ryū usually occupies the remainder of class time.  These waza are divided into the categories listed  below:

•  Ōdachi (50 victories occurring in 36 encounters with a partner using the daitō or ōdachi [long sword])
•  Kodachi (9 victories occurring in 5 encounters using the kodachi [short sword] against ōdachi [long sword])
•  Ai-kodachi (8 victories in 6 encounters with both participants using kodachi)
•  Kōjō Gokui Goten (5 techniques that exemplify the original five principles of the art)
•  Tachiai Battō (5 techniques of battō-hō, drawing and cutting in one motion with the daitō)

As with all koryū (ancient) budō, a portion of class time is usually devoted to explanation of some of the deeper philosophy of the art, its history, or its practical application to modern day situations and issues.