Aragaki-Ryū is an obscure, eclectic style of Okinawa kobujutsu, the use of common tools and constabulary equipment for self-defence and the protection of the innocent.  What makes Aragaki-Ryū unique is that, like Shito-Ryū karate-dō, it combines the techniques and principles of all the major styles of Okinawa kobujutsu that existed at the time it was founded, making it a complete and comprehensive system.

The founder of Aragaki-Ryū was Higa Yasuhiro (1908-1984), an Okinawan karate-ka who studied Okinawa kobujutsu under several of the 20th century pioneers of the art and combined all of their styles into a single, multifaceted system.  The name "Aragaki-ryū" (新垣流) was chosen from the names of  two of Higa's earliest and most famous sensei, Aragaki Seishō (1840-1918) and Aragaki Ankichi (1899-1927).  Higa Sōke credited these two men with establishing his foundation in, and love of, Okinawa kobujutsu.  He believed that neither man had received the credit they deserved for their contributions to, and influence on, Okinawa kobujutsu, and wanted to honour them.

During the difficult period immediately after World War II, Higa moved from Okinawa to the city of Nagoya on the Japanese mainland seeking work.  As karate-dō began gaining in popularity in the 1950s and 1960s, Higa Sōke made several attempts to establish a dōjō in Nagoya, but they were unsuccessful.  Higa attributed these early failures to the prevalent attitude among mainland Japanese that Okinawans were "country bumpkins" with little education and refinement.  His cause was probably not aided by his low status as a railroad labourer and his Uchina-guchi Okinawan dialect and accent. 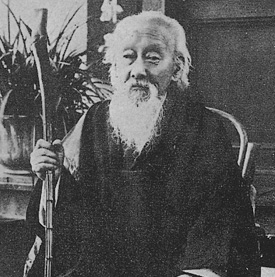 At the dawn of the 20th century, Okinawa kobujutsu was a dying art.  The word "kobujutsu" means "ancient peacemaking arts," and the systematic use of the bō (six-foot staff), eku (sculling oar), and other kobujutsu weapons predates the development of karate in the Ryūkyū islands.  But, with the abolition of the samurai caste, and the annexation of the Ryūkyū islands as a prefecture (ken) of Japan, the need for, and interest in, kobujutsu was waning.  Although karate-dō was enjoying a resurgence in Okinawa as a result of being introduced into the public school system as part of the physical education curriculum, kobujutsu was quickly being forgotten.  One of the few remaining practitioners of the art was Aragashi Seishō.

Aragaki Seishō (left) was one of the most important figures in both karate and Okinawa kobujutsu of the 19th century.  He served as an official translator in the royal court of Ryūkyū and frequently traveled to China in his official capacity.  Aragaki was also one of the principle sensei to karate legends, Higaonna Kanryō and Mabuni Kenwa.  He created several kata (training patterns) still practiced today, including Aragaki-no-kon, Sesoko-no-kon, and Aragaki-no-sai.  Although Aragaki never formally established a style of his own and cannot be considered the founder of Aragaki-Ryu, in the truest sense he was certainly the progenitor or "father" of the style. 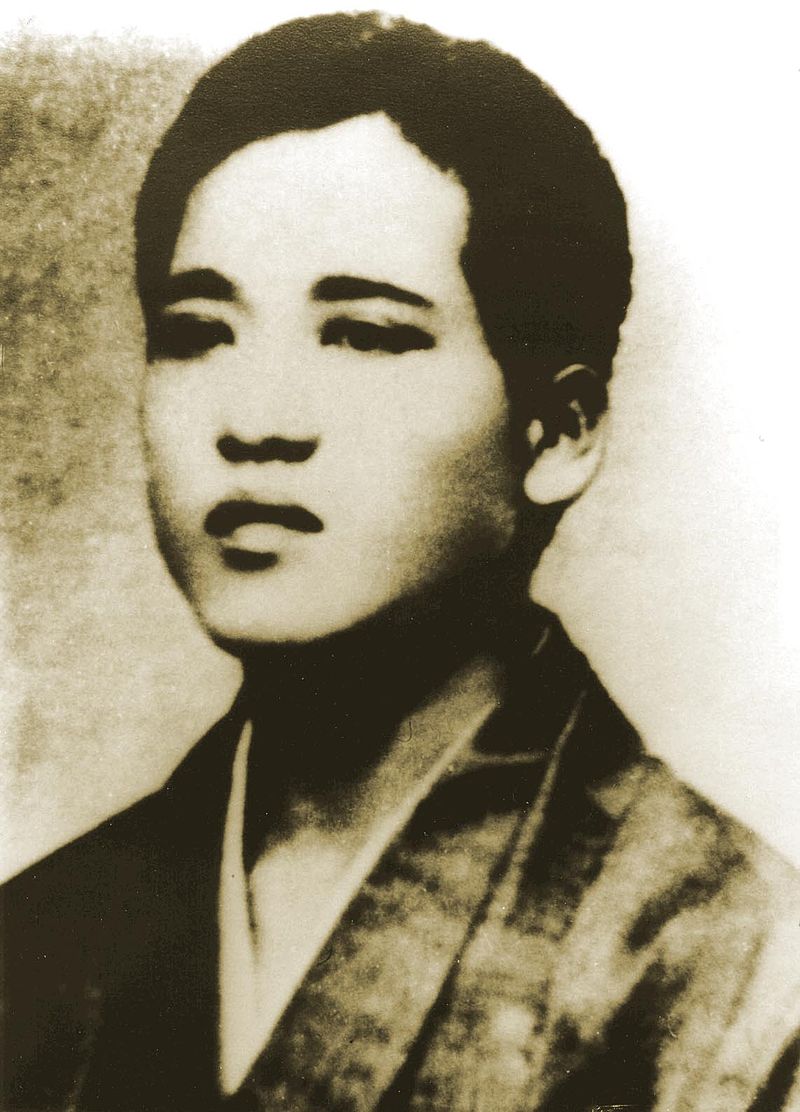 Aragaki Ankichi was the son of wealthy Okinawan sake brewers.  It is not known what relationship he had, if any, to Aragaki Seishō.  He was a gifted athlete and quickly developed into an acknowledged master of both karate-dō and Okinawa kobujutsu under the tutelage of Hanashiro Chōmo, Shiroma Shimpan, Chibana Chōshin, Motobu Chōki, and Kyan Chōtoku.  During his tragically short life, he was sought out for instruction by several of the renowned karate and Okinawa kobujutsu masters of the 20th century, and was a close friend of Mabuni Kenwa.  He gained notoreity for killing a man with a single tsumasaki geri (toe kick) to the thigh during a fight. He died of stomach ulcers in December 1927 at the age of just 28, yet is considered one of the most influential budōka of his time.

Two other key figures in the development and popularisation of Okinawa kobujutsu were Yabiku Mōden (1882—1945) and Taira (Maezato) Shinken (1897—1970).   Yabiku Mōden made it his life's work in the early 20th century to collect as much knowledge of the dying art of Okinawa kobujutsu as possible and preserve it.  In 1911, he moved to the Japanese mainland and founded the Ryūkyū Kobujutsu Kenkyū-Kai (Ryukyu Kobujutsu Research Association). His chief pupil was Taira Shinken, who returned to Naha, Okinawa in 1941, and founded the Ryukyu Kobujutsu Hōzon Shinkō-Kai (Ryukyu Kobujutsu Preservation Society) in 1955 after the training ban was lifted by the America occupation forces.

Higa Yasuhiro (1908—1984) was born and lived the first half of his life in Naha, Okinawa.  Like most members of the Higa family, he began his training in karate-dō and Okinawa kobujutsu as a young boy, first with Aragaki Seishō and later with other notables, including Aragaki Ankichi, Chinen Masaami, and Taira Shinken.  However, most of his training came from other members of the Higa family, probably including the renowned Higa Seikō, several of whom had studied extensively with those experts.  Any records of his education were destroyed during the battle of Okinawa, and there is no record of him ever serving in the armed forces.  After completing his formal education—probably middle school—around 1925 he got a job with the Okinawa Kenei Tetsudō (Okinawa Prefectural Railway) as a maintenance worker.  The railway was destroyed during the Battle of Okinawa and never rebuilt.  This prompted Higa to move to mainland Japan shortly after the war, where he found work with the Nippon Kokuyū Tetsudō (Japan National Railway) in Nagoya, where he remained employed as a maintenance worker until his retirement in 1969.

After the post-war ban on martial arts training was lifted in 1953, Higa began teaching his eclectic form of Okinawa kobujutsu.  Unfortunately, there was still widespread prejudice against Okinawans and Okinawan culture in mainland Japan, so he attracted few students.  Among the first to begin training with him was Sakakibara Kazuo (1921-1992).    Higa Shihan was never able to establish a dōjō of his own.  Instead, most of his instruction from the mid-1950s until his death in 1984 was conducted in the garden of Sakakibara Kazuo's home in Nagoya.  Sometime in the mid-1950s, as karate and Okinawa kobujutsu styles were proliferating, his students suggested that Higa register his system with the Dai Nippon Butokukai as Higa-Ryū.  But Higa objected, saying: "I did not create any of this.  I only pass on what I learned from others."  When pressed to provide a name for his style, he said:  "If you must call it something besides just Okinawa kobujutsu, say Aragaki-Ryū, because Aragaki's teachings are its primary source."

Higa Yasuhiro died of a stroke in 1984.  As Higa's senior student, Sakakibara Kazuo took over responsibility for teaching Aragaki-Ryū, and training continued in his garden until his death from lung cancer in 1992.   At the time of Sakakibara's death,  Shōda Hideo (1941-) was his senior student, having begun his training in Aragaki-Ryū soon after moving to Nagoya in 1963.   With Sakakibara Shihan's garden no longer available, Shōda Shihan partitioned off a section of the storage room above his bicycle shop in Nagoya and converted it to the style's first indoor dōjō.

Leonard J. Pellman Shihan was first introduced to Aragaki-Ryu in 1968, while living in Japan as a high school exchange student.  He lived with  the family of Shōda Hideo’s uncle in Toyokawa, a city located about 50 miles from Nagoya.  When the family learned of Pellman’s interest in budō, they arranged for him to visit Nagoya several times as a guest of Shōda Sensei and train with Higa Shihan.  After returning to the United States, Pellman attended several summer training camps taught by Richard Kim that developed his interest in Okinawa kobujutsu further.  In 1973, Pellman returned to Japan and spent two months as an uchideshi (live-in student) with Higa Shihan and his senior students, including Sakakibara and Shōda.  When Pellman returned to Japan again in 1981, Higa Shihan promoted him to shodan (1st dan), the last dan ranking issued by Higa Shihan before his death. 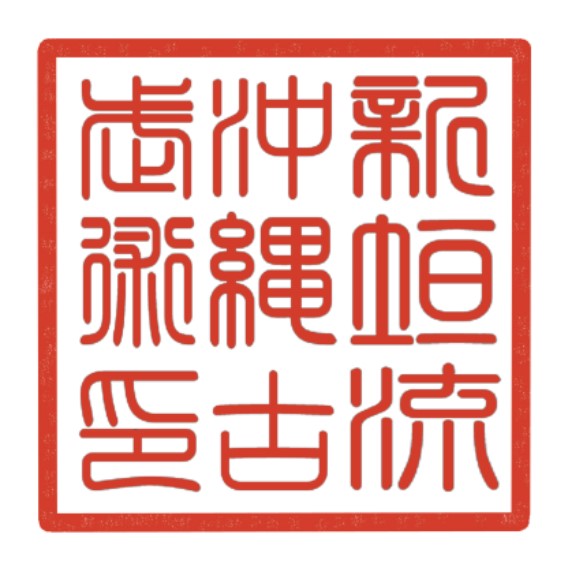 Intent on continuing to expand his knowledge and skill in Okinawa kobujutsu, in 2008 Pellman Shihan obtained Shimabukuro Hanshi's permission to teach Aragaki-Ryū and formally affiliate the Seishin-Kan with the Aragaki-Ryū hombu dōjō.  When Shōda Shihan received Pellman's letter requesting formal affiliation, he decided it was time to expand Aragaki-Ryu beyond a single, small dōjō in Nagoya, and attempt to gain a global following for the style.

Prior to Pellman's request, no formal organisation for Aragaki-Ryū had ever been formed, so Shōda Shihan formed the Kokusai Okinawa Kobujutsu Renmei (International Okinawa Ancient Peacemaking Arts Federation) in order to establish an organisation with which other dōjō could formally affiliate.  He then appointed Pellman Shihan as Hokubei Buchō (Head of the North American Division) and tasked him with promulgating Aragaki-Ryū throughout North America.

The next weapon most Okinawa kobujutsu students are taught is the sai.  A sai is a three-pronged iron or steel truncheon that was imported to Okinawa from China, and used by Okinawan constables to defend against and subdue criminals armed with swords, spears, and other bladed weapons.  Sai are nearly always used in pairs, and sometimes with a third sai tucked into the obi (belt) at the user's back.  Two types of sai are used in Aragaki-Ryu:  the standard sai and the manji-sai.  More information about both varieties of sai is available here.

One students have gained some proficiency with the bō and sai, they are usually introduced next to the tonfa.  The tonfa is a weapon unique to the Ryūkyū islands that was originally the wooden handle from a hand-operated grinding wheel.  Centuries later, the standard PR-24 police baton used widely throughout the United States was modeled after the tonfa.  Tonfa are almost always used in pairs.  There are many shapes and styles of tonfa now available, but Higa Shihan believed that the funagata (boat-shaped) style was the most authentic.  Additional information about the tonfa can be found here.

Typically, students progress next to the kama, which is a hand-held sickle.  Kama are also used in pairs, and in trained hands are one of the most devastating and intimidating of the Okinawa kobujutsu weapons.  In class, students train exclusively with unsharpened kama for safety.  Further details about the kama is provided here.

In states other than Texas, students would next be taught the nunchaku.  Unfortunately, however, nunchaku are illegal in Texas, even in a dōjō, so they are not included in the Texas curriculum.  Nevertheless, additional information about nunchaku is available here.

After the nunchaku, students are typically taught to use the eku, which is a narrow sculling oar used throughout Japan and the Ryūkyū islands.  Eku techniques are similar in most respects to the bō , except that the eku had edges and a point on its blade that can be used to strike in the manner of a spear or naginata, in addition to the handle which can be used like a bō .  More details about the eku can be found here.

The weapon normally taught next in the Aragaki-Ryū curriculum is the nunte, sometimes called the nunte-bō.  The nunte is a pole-mounted fishing gaff shaped like a manji-sai.  In trained hands it is another highly effective and intimidating weapon.  Additional information on the nunte can be found here.

The final weapon included in Aragaki-Ryū is the kuwa, a long-bladed hoe on a 30- to 36-inch handle.  For more details on the kuwa, please click here.

Some of the weapons found in other styles of Ryūkyū kobudo that are not included in the Aragaki-Ryū curriculum include:  the tekkō (D-shaped "brass" knuckles made of iron or steel), tanbō (an 18-inch stick), hanbō (30-inch stick), surujin (chain with a weight on one end), kusarigama (kama on the end of a chain), sansetsukon (3-section staff), and tinbe to rōchin (turtle shell shield and short-handled spear).  According to Higa Shihan, these were specialty weapons not widely used on the main island of Okinawa, so he did not include them in his curriculum.

For information on how to arrange for Pellman Sensei to conduct a seminar in your area, please click here.